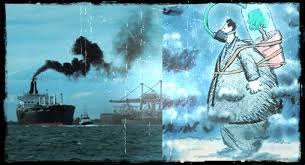 Objectives: Marine engineers are in their occupation exposed to different chemicals, organic solvents, exhaust gases, oils, and petroleum products, and were formerly exposed to asbestos. The aim was to study the cancer pattern, with particular attention to lung and bladder cancer, in an Icelandic cohort of marine engineers, indirectly controlling for their smoking habits.

Methods: A cohort of 6603 male marine engineers was followed up from 1955 to 1998, a total of 167,715 personyears. The cohort was record linked by the engineers’ personal identification numbers to population-based registers containing the vital and emigration status and cancer diagnosis. Standardized incidence ratios (SIRs) were calculated for all cancers and different cancer sites in relation to different lag time and year of graduation. Information on smoking habits was obtained by administering a questionnaire to a sample of the cohort (n¼1501).

Conclusions: The increased risk for mesothelioma is possibly attributable to the previous asbestos exposure. The excess of lung cancer could also be related to asbestos exposure. The high incidence of stomach cancer, lung cancer, and bladder cancer may be related to exposure to chemical risk factors, such as oils and petroleum products, as confounding due to smoking seems to be ruled out. In the light of the limited exposure information in the present study the importance of the different occupational exposures needs to be evaluated in further studies.

One thought on “Cancer incidence among marine engineers.”